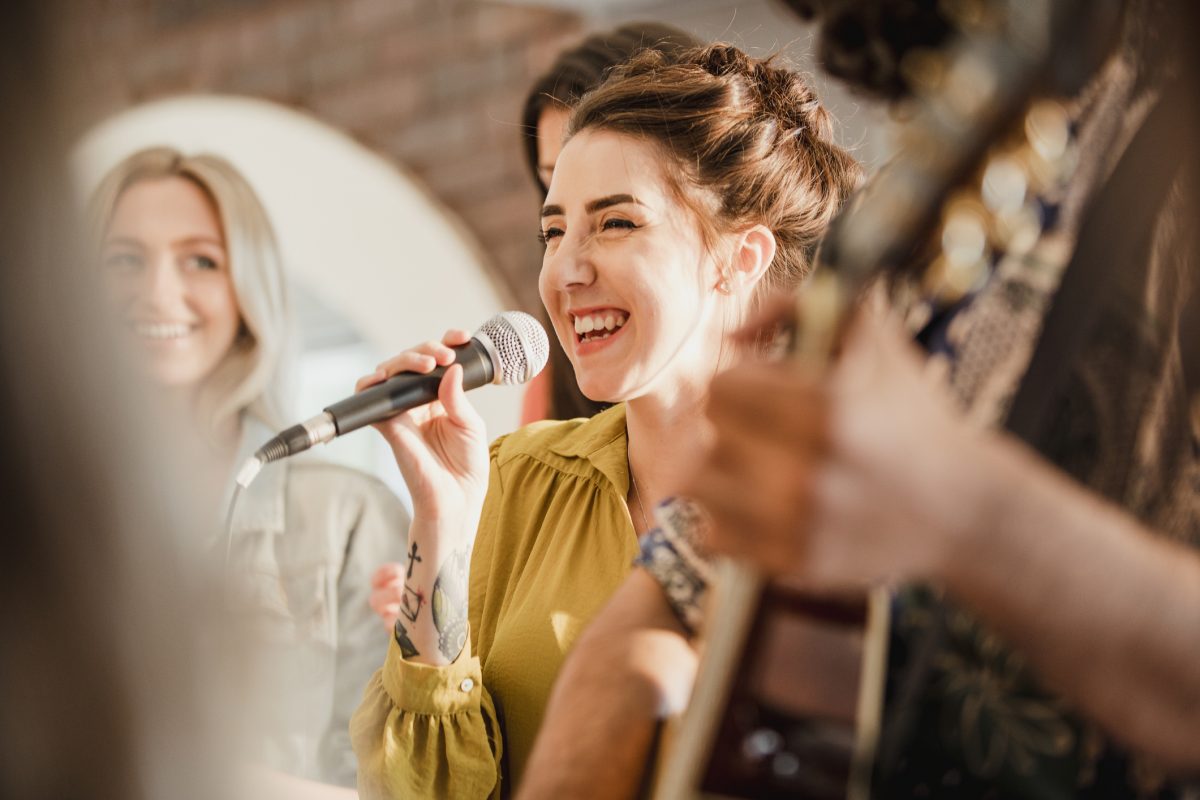 “Particles shoot out like a geyser”: Singing, Covid-19, and the Future of Live Entertainment

Since the early days of the covid-19 pandemic, singing has been a super-spreading culprit leading to an effect on the future of live entertainment.

Around the world, choristers have become infected at remarkably high rates. At a rehearsal in the United States, 53 of 61 singers contracted Covid-19, and a practice in France infected 19 of 27. A choir seminar in Austria left 43 of 44 singers infected, and after the Amsterdam Mixed Choir performed Bach’s St John Passion, 102 of 130 members fell ill.

Karaoke, too, has sparked numerous outbreaks, including an explosion of cases traced to a popular Quebec City bar. In the coronavirus era, noted Quebec City’s health director, “All singing poses a problem.”

Science shows that’s true. Singing emits high volumes of aerosol, and infectious particles generated by one singer can sail across a choir hall, as far as 13 meters, only to be inhaled by another. But is singing more hazardous than, say, loud conversation at a pub? Not substantially.

As British scientists have found, aerosol transmission of disease is “equally possible” whether the particles are produced by singing or loud speaking — a finding of importance to anyone who operates an establishment noisier than a library.

With vaccinations underway, we can plan for a time when choirs reconvene, karaoke bars reopen, restaurants operate at full capacity, and musicians get back on the road. But post-pandemic, the landscape for entertainment and hospitality will look different than it did before.

Moving forward, building operators will need a working knowledge of SARS-CoV-2 transmission and of the precautions, such as air dis-infection, proven to mitigate the risks of singing and socializing indoors.

“Covid is here to stay, in some shape or form, and we need to adapt,” says Martin Harte, CEO of The Temple Bar Company, the not-for-profit organiser of TradFest, Ireland’s largest festival of traditional music. Harte adapted by installing medical-grade air dis-infection devices at Dublin Castle, the historic fortress where TradFest musicians performed indoors, with government permission, amidst the pandemic. The sessions, livestreamed to a global audience, did not lead to a single infection.

“Music travels through the air, and so does the coronavirus,” says Harte. “I wasn’t going to put our performers or crew at risk.”

From TB to Covid: The Super-Spreading Power of Singing

In 1962, at an American boarding school, two boys, feverish and coughing, were diagnosed with tuberculosis and admitted to the hospital. Testing at the school turned up 25 more cases. A medical team was dispatched to study the outbreak. At the time, conventional wisdom held that TB was transmitted via large respiratory droplets and close contact. But intriguing rodent studies suggested otherwise. If guinea pigs could become infected from afar, perhaps humans could, too.

At first, the medical team was stumped. Though all 153 students slept in a single, poorly ventilated dormitory, the TB cases were randomly distributed. Classroom and chore groupings revealed no patterns, either.

But further analysis yielded a clue: Among members of the school choir, 60% contracted TB, compared to just 20% of the student body as a whole. Reporting in the Journal of the American Medical Association, the doctors noted that three other mid-century TB outbreaks had been associated with choir singing.

“It seems quite possible,” the doctors wrote, “that vigorous singing could be an effective generator of fine particles in large quantity.”

“When you sing, microscopic particles burst forth from your mouth in a fountain of mist . . . shooting out like a geyser,” explains James Hamblin, M.D., an American public health physician. “The rush of exhaled air creates an aerosolized mixture of everything that’s lingering in the mucus membrane of your pharynx.”

This location, he notes, is “exactly where the coronavirus attaches and replicates.” Until Covid-19 began rampaging through choirs, the connection between singing and disease transmission had largely been forgotten.

Instead, aerosol scientists focused on more ordinary sources of respiratory emissions — coughing, sneezing, talking, and breathing. Studies were conducted for the purpose of helping reduce spread of the flu.

As one prescient research team, from the U.S. National Institute for Occupational Safety and Health, noted: “To prepare for a possible influenza pandemic, a better understanding of the potential for the airborne transmission of influenza from person to person is needed.”

What that study found: while coughing generated more viable influenza particles than mere breathing, the difference was not large and “both respiratory activities could be important in airborne influenza transmission.”

Another flu-focused study compared emissions while speaking at various volumes. “We showed that as you talk louder, no matter what you say, you will release more particles,” reported chemical engineer Sima Asadi, Ph.D., the study’s lead author.

The key take-away, Asadi said: “Talking is potentially as important as sneezing and coughing for influenza transmission.